Have You Been Mining VertCoin (VTC), Today the Price is Up 100% 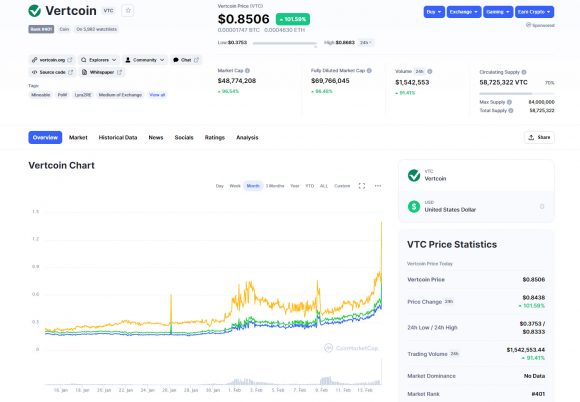 Today VertCoin (VTC) is on fire with the price going up with more than 100% already and that should serve as a good reminder that you might want to check out mining it after it forked to the new memory-intensive VertHash algorithm. Even though the price is significantly higher at the moment, there hasn’t been much of a change in the network difficulty and the number people mining VTC haven’t increased much… yet! Originally VertCoin (VTC) mining was interesting mostly for older GPUs that were good mining cards (with at least 2GB of VRAM), but are not capable of mining Ethereum due to the large DAG size. But now with the recent price spike even newer video cards that are being used for Ethereum mining can become very profitable if switched to mine VTC at the moment…

The VertHash algorithm is a memory-intensive one, though it has its differences from Ethash used by Ethereum for instance. The main advantage is that you can mine VTC on any GPU that has at least 2GB of video memory, so older mining GPUs can be brought back to life, so time to dust off that good old AMD Radeon R9 280X GPUs or Radeon HD 7970 GPUs and start mining VTC with them. Even Radeon R9 290 or Radeon R9 390 can do pretty good at the moment, although these might still be good for Ethereum mining under Linux with high mining hashrate. So, make sure you double check what works best for them and what not in order to maximize your mining profit.

The AMD Radeon RX 470 and RX 480 or RX 570 and RX 580 with 4GB VRAM were great for mining VTC using the new VertHash algorithm before the price spike, but now they will be even better in terms of profitability mining VertCoin. So much better that you should probably stop using them for mining Ethereum (ETH) in “Zombie Mode” at least for a while. With the doubled price at the moment, even the latest Nvidia GeForce RTX 30 series of GPUs that do spectacularly in terms of VertHash hashrate for mining VTC can turn out to be more profitable than directly mining Ethereum.

– To Calculate Your Current VertCoin (VTC) Mining Profitability on MinerStat…

How to Become a Blockchain Architect?